The following is an exerpt from "Round Lake, Little Village in the Grove". Credit to: Mary Hesson, David J. Rogowski & Marianne Comfort 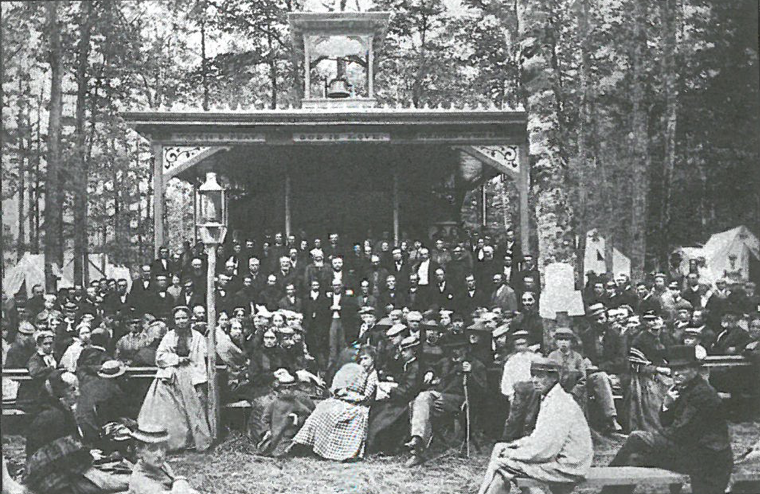 The first Round Lake Camp Meeting in 1868 centered around the Speaker's Stand where famous speakers of the day inspired the outdoor congregation.

The call to worship came to Round Lake before dawn. The ringing of a bell as early as 4 a.m., a Methodist camp meeting tradition, woke people sleeping in hundreds of tents set up among the tall hemlock, oak, pine and chestnut trees. Mothers gathered to pray for wayward children. Leaders asked for guidance for educators and for the reporters alerting the rest of the world to the movement of the spirit in this spot between Albany and Saratoga Springs.

For hours, they sang, prayed and listened to sermons by mighty preaching voices. Those especially captured by the religious fervor came forward to give personal testimonies, calling out "glory to God!" as they shared stories of the grace of God saving them from sin. Round Lake drew up to 20,000 people high-society women with plumed French hats, country girls in ready-made suits, and men in dark wool coats and trousers at one national camp meeting, according to published reports at the time.

For days on end participants lived in a makeshift village of church owned tabernacles and individual tents rented for $3 a season. They picnicked with foods brought from home or dined on steak and roast beef dinners for 35 cents in the camp's dining hall. A grocery store, barbers and bootblacks eventually found some business in serving the mammoth gathering.

AII of this was just a dream when Joseph Hillman and Gardner Howland claimed this patch of land for the Troy Conference of the Methodist Episcopal Church in 1867. Hillman was a prominent Methodist layman who in 1858 had organized the Troy praying band, a group of men who were credited with drawing up to 80,000 people throughout New York state and New England into active church life. "The work of the band has been, and still is, to rally the laity to the help of the ministers," according to Hillman's statement of the organization, "and God has wonderfully blessed the efforts of its members."

A Troy newspaper account noted "a full and deeply interested congregation" at a band meeting at the State Street Methodist church in Troy on Feb. 22, 1869. Hillman's preaching "was eloquent, stirring, emotional and seemed to place every one present in the audience under a strong conviction of sinfulness and of the need of repentance."

Before he died in 1890, Hillman saw educational programming begin to seep into gatherings earlier reserved for pure religious worship. This prompted the Round Lake Camp Meeting Association to change its name to the Round Lake Association in 1887.

Yearly camp meetings continued in some form into the 1930s, and sporadically into the 1940s. The last in this line of revivals took place in 1948, by a traveling revival group, long-time residents recall.